One of our earliest blogs, “Folders are not metadata” made a lot of people rethink their workflow, and we’ve heard it’s become essential reading for many. While that blog made a very striking point about not using folder structures as the sole keeper of metadata, it didn’t offer a streamlined answer for it either. That’s because all the solutions that existed at the time were what we call space shuttles: very complex interfaces that clutter your display with a long list of options, but without providing context.

So we let the problem simmer and decided to tackle it as part of a larger roadmap that we kicked off in Summer 2019.

Elements are custom fields that you can use in a preset, and then review before starting a transfer:

That’s one line describing two years of work. A lot of refinement went into this feature, built in close collaboration with VICE and DPG Media, who have been using a pre-release version in active production for more than a year. Their feedback has been instrumental in polishing this release.

Every company has core values. One of ours since day one is that we built software for the end-user, not for decision-makers who are often distant in the organization. We focus on the people that are doing the actual job our software helps with, instead of building some white-collar functionality that’s irrelevant to anyone not in the “ivory tower”.

But... the end-user of Hedge isn’t the same person that uses the media that Hedge transfers. It’s likely to be a chain of people: maybe a media manager, assistant editor, or just the editor themselves. If the data handler simply drops unorganized media in the media manager’s lap (”to throw it over the hedge”, per the Dutch saying) the media manager might be in for an unpleasant surprise.

How do you cater to both sides of the proverbial hedge, without creating unnecessary noise or friction in the workflow?

Hedge’s Presets release tackled that problem, by allowing someone else to decide on folder structure, renaming rules, and filtering settings for you. So you know, in advance, how your colleagues want their data to be organized.

It has also helped with breaking out of the lonely echo chamber that a production often is. Presets let you loop in others, peers even, who are not working on the same production; it facilitates sharing knowledge. Some users are even creating presets for each other, after asking around about best practices 😍

Until today, Presets in Hedge were about streamlining the organization of your media as it got transferred. But there’s more to a production, a lot more. If you ask people down the line what causes hiccups, holdups, or even major delays, it’s nearly always a lack of metadata. So let’s add metadata!

What “metadata” means is often opaque - it lacks context. To a DP, metadata is generated by the camera and the lens; to an editor, it might be nothing more than scene/take/slate; to a colorist, the color space is essential metadata, and to a media manager it might be just the subject of the video (”Prime minister in front of Downing St. 10 talking about garden parties.”) because, without that, chances are it will be lost in the company MAM forever. But adding all that “metadata” is what leads to space shuttle UIs. Nobody wants that.

First, we need context. Ask someone if they need metadata and they’ll say “of course, make sure you include the metadata.” But that doesn’t tell you anything. Which metadata? What’s the metadata for? Keep asking those questions, and you’ll quickly learn there’s a colorist involved with their own particular metadata needs, or that you’ll need to include production IDs, location, or whatever your client requires. No one has the same set of requirements. Ever.

Back To The Future

Software doesn’t really care about whether something is considered “metadata” or not, nor where it originates from. To a developer, it’s just another key/value pair.

What makes something “metadata” solely depends on whether you need it later or not, and in which context. How to extract, generate, or manually add it, is secondary to that.

To cut a long story short: we’re calling these customizable metadata types elements - they’re all elements of your workflow. An element can be whatever you want it to be: a static value, something generated, something fetched, or something that requires human input. And it’s the latter that’s by far the most important one as it adds the most context.

So, now you can go beyond the fog of disorganization; the chaos of unassociated media. Elements allow you to create custom metadata fields to use in your presets, for your folder structure, or simply to add notes so that there’s more context for the people down the line.

When you define metadata elements in your preset, and use the preset in a data transfer, Hedge will ask you to add information to that transfer: to Review the source, if you will.

And the beauty of it? Review only shows up when it’s needed. There’s no noise when using presets that don’t have custom elements, and if Review pops up you can be sure you’re required to add some data. Switch off Presets, and Review vanishes again. And, if your Preset only uses auto-populated elements like timestamps and auto-labels, click a label to review that data.

Elements are also available in Hedge’s integrations like Scratch and Foolcat, and of course through Hedge’s scripting engine. This way, it’s easy to automate actions based on, for instance, an element that describes whether transcoding is needed, or by kicking off new transfers to specific destinations like Frame.io based on certain file extensions using Hedge’s API. This is a big deal in building automated workflows, and the sky’s the limit 🚀

We want media managers, data handlers, and creatives to spend less time organizing files before and during an edit. Editors and assistants lose way too much time on administration but could start editing right away if incoming clips had all their information attached before arriving in post-production.

Through elements, you can be sure you have done everything that’s needed to organize your data for post-production. Vice versa, if you’re a media manager or workflow supervisor, Hedge’s presets allow you to be sure you’re ahead of the game instead of playing catch-up as soon as the first travel drives start to arrive. Peace of mind, for everyone: that’s what we’re here for.

The advent of HDR, RAW video, and wider colorspaces mean that post-production workflows are dramatically better at dealing with high-end images today than they were a decade ago. That in itself is awesome. But for post-professionals to make the most of the myriad of technical and creative choices it brings,

Automatically add metadata to all your iconik assets, with Hedge 22.2. 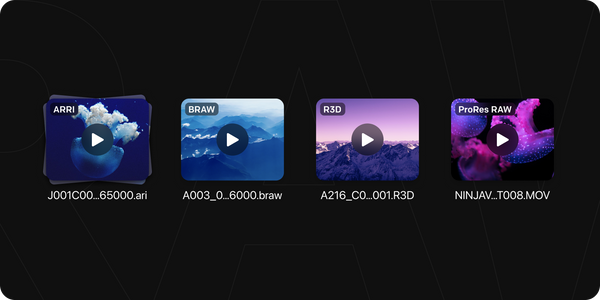 For 14 years, EditReady has had your back transcoding your footage to an editable format, fast. And now, it’s ready for RAW.